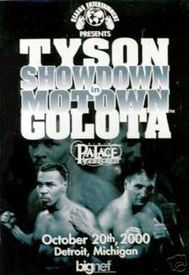 Tyson vs Golota
"Showdown in Motown"
October 20th, 2000 at Palace of Auburn Hills
This is the official fight night poster sold only that night at the palace
Measures 24"x36"