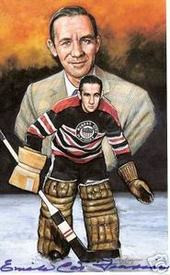 The Legends of Hockey Limited Edition Artwork series was created for the Hockey Hall of Fame by Hockey Legends USA, Inc. Originally released in 5 series of 18 cards each and sold exclusively by DC SPORTS and The Hockey Hall of Fame from 1992-1996. Each Card measures 5.5 x 3.5. It is Hockey's equivalent to the Perez-Steele Baseball Cards or Goal Line Football Cards. Each card is limited to 10,000 produced. DC SPORTS has autographed versions of many of this series. Some are more limited than others.