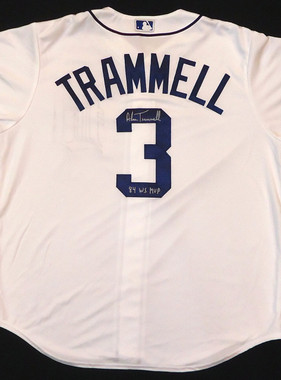 Alan Trammell was a career long Detroit Tiger who played Shortstop from 1977-1996. A fan favorite, Tram was one of the top Shortstops of the 1980's. In 1984, he lead the Tigers to the World Series Championship earning World Series MVP honors for his play.

All of our Alan Trammell Autographed Memorabilia is backed 100% by our DC SPORTS Certificate of Authenticity. We will add our Tamper-Proof Hologram to each Alan Trammell signed jersey at no charge upon request.