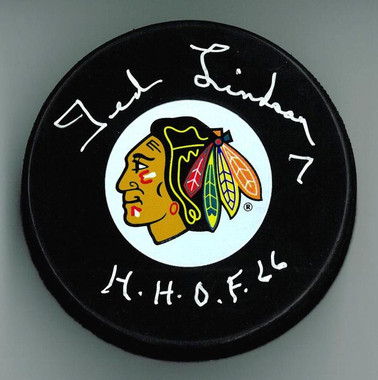 Ted Lindsay signed this Hockey Puck at a DC SPORTS signing. Ted Lindsay has appeared at DC SPORTS shows and in our stores over 25 times, including 3 times in 2009, and 3 times in 2010. All Ted Lindsay autographs are sit-down signatures ensuring the highest quality autographs possible. All Pucks are hand-autographed using a paint pen and are shipped in protective cases to ensure they arrive safely.

Ted Lindsay was one of the toughest players ever to play in the NHL. His gritty play earned him the nickname Terrible Ted. Also a highly skilled player, Ted Lindsay was inducted into the Hockey Hall of Fame in 1966.

All of our Ted Lindsay Autographed Memorabilia is backed 100% by our DC SPORTS Certificate of Authenticity. We will add our Tamper-Proof Hologram to the back of each Ted Lindsay signed puck at no charge upon request.