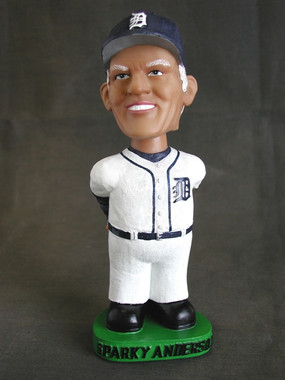 This bobblehead was produced exclusively for DC SPORTS by Alexander Global
It measures roughly 7" in height
Very Limited!

Our partnership with the Hockey Hall of Fame during the 1990’s allowed us to produce merchandise such as the Legends of Hockey Card Set. The partnership made it possible for us to bring in over 60 Hockey Hall of Famers for autograph sessions, including Sid Abel, Bill Barber, Mike Bossy, Johnny Bower, Gerry Cheevers, Woody Dumart, Tony and Phil Esposito, Fern Flaman, Boom-Boom Geoffrion, Eddie Giacomin, Red Horner, Gordie Howe, Bobby Hull, Tom Johnson, Ted Kennedy, Harry Lumley, Stan Mikita, Bernie Parent, Bill Quackenbush, Maurice and Henri Richard, Allan Stanley, Harry Watson, and Gump Worsley, along with many other Hall of Famers over the years.