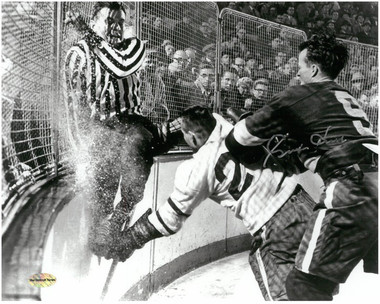 Gordie Howe signed this 8x10 photo at a DC SPORTS public signing. Gordie Howe has appeared at DC SPORTS shows and in our stores over 25 times. All Gordie Howe autographs are sit-down signatures ensuring the highest quality autographs possible.

Gordie Howe is widely regarded as the greatest Hockey player of all-time. His NHL career spanned over 25 seasons, plus six more in the newly formed WHA. At 51 years of age, Gordie Howe played his final NHL season, scoring 15 goals for the Hartford Whalers.


All of our Gordie Howe Autographed Memorabilia is backed 100% by our DC SPORTS Certificate of Authenticity. We will add our Tamper-Proof Hologram to each Gordie Howe signed photo at no charge upon request.