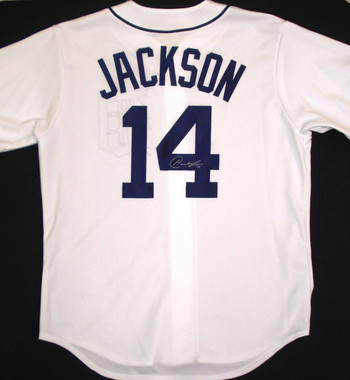 Austin Jackson is the Detroit Tigers exciting young Center Fielder and Lead-Off Hitter. In 2010 he was a close second for American League Rookie of the Year. His blazing speed and athletic play has endeared him to Detoit Tigers fans. Austin Jackson signs autographs in the Metro Detroit area exclusively with DC SPORTS. There is no better place to get an Austin Jackson autograph.

All of our Austin Jackson Autographed Memorabilia is backed 100% by our DC SPORTS Certificate of Authenticity. We will add our Tamper-Proof Hologram to each Austin Jackson signed jersey at no charge upon request.